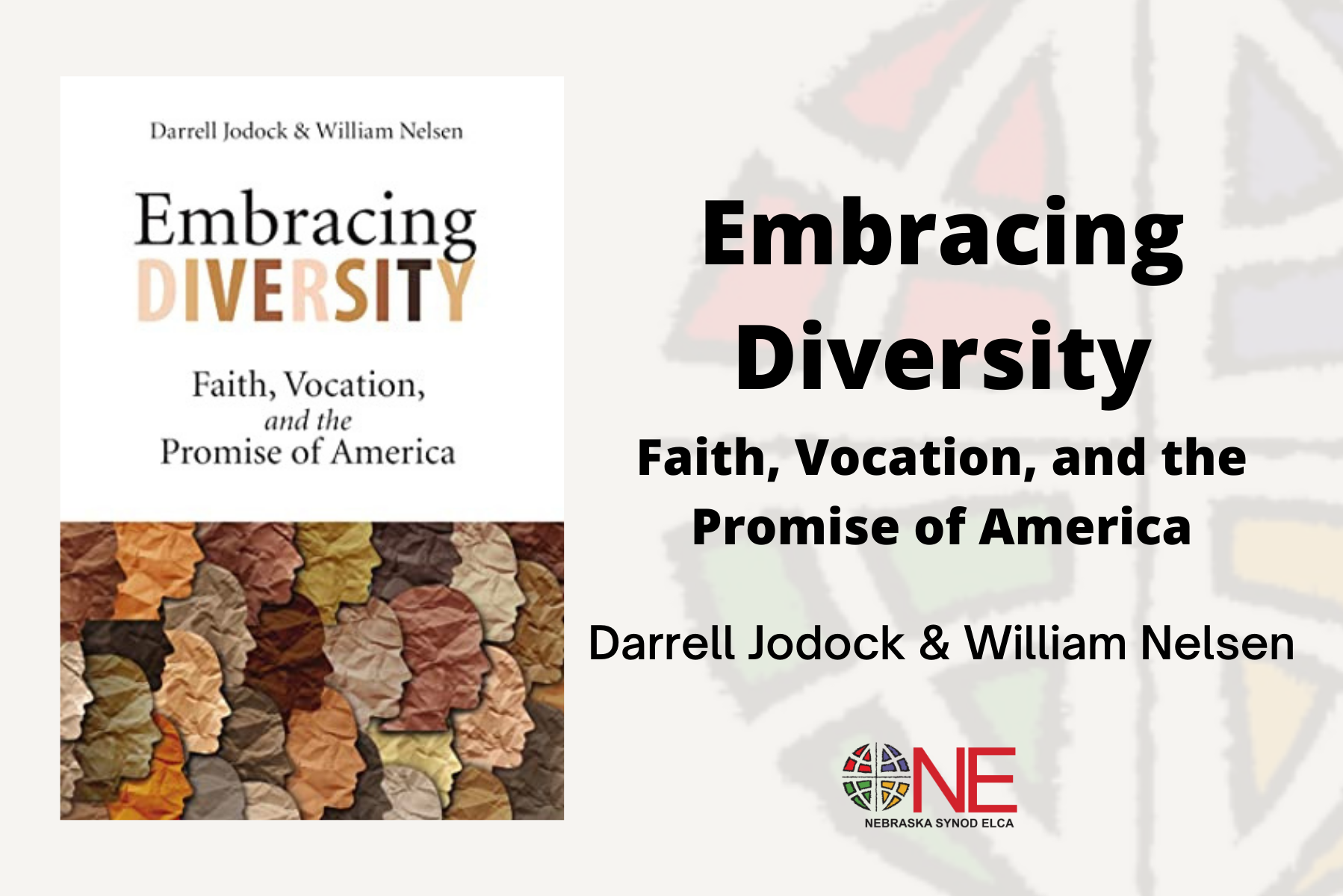 Embracing Diversity: Faith, Vocation and the Promise of America

In their recent book, Embracing Diversity, authors Darrell Jodock and William Nelsen lay out a path of possibility for individuals and congregations who want to move toward greater diversity but who aren’t sure where to begin or how to proceed.

Some will recognize Bill Nelsen’s name—he was at one time the University Minister at Midland University. An ordained pastor, he and Jodock both show themselves familiar, comfortable and effective with the Lutheran notion of vocation, using it to ground this helpful work.

The book opens with a clear and accessible discussion of faith and its many facets, and why embracing diversity is a natural outcome of faith. Noting that faith is relational, hopeful and freeing (among other things), the authors discuss how it also produces vocation—how each of us is called to “channel the gifts of God to others,” both for the sake of individuals and the community as a whole.

The book then discusses America’s checkered history of race relations and its great promise for all people going forward, without denying the great challenges we face—particularly those of us who have been in the ethnic and racial majority. In pastoral yet firm ways, the book lays out many of those challenges, and encourages the church to be at the forefront of addressing them—not only denominations, but congregations and individuals. It particularly invites us to be an antidote to the misuse of religion to divide people.

Noting that exposure alone to people of other races, ethnicities or religions is not enough—and may even be counterproductive—the authors call us to live the genuine hospitality that’s fundamental to the Gospel by engaging others intentionally and practicing mutual welcome. This is no easy task, and it is rooted not in optimism but hope; a term whose definition they borrow from Rabbi Irving Greenberg: “hope is a dream which is committed to the discipline of becoming a fact.” Such committed discipline is critical to the persistent work of growing diversity—as is, they note, a good sense of humor.

Perhaps the most helpful chapter for those who wish to begin a conversation on diversity in their congregation or community is the one on “Mobilizing to Embrace Diversity.” It offers a host of ideas for strategizing and carrying out efforts to move toward true diversity, many of which could be used to form a simple but effective game plan in the local setting.

After an encouraging chapter on “Finding Joy in Diversity,” the book concludes with a renewed call for both our nation and our church to live up to their potential for becoming a society more consistent with the vision of the Reign of God: the vision of a diverse and just community for all.

This is an easy but motivating read that leaves one feeling compelled to take action. Reading it with a group would be a great first step toward discussing and then practicing diversity in one’s own congregation, neighborhood or community.

Order Embracing Diversity at Amazon, Barnes and Noble, or Bookshop